Wrapping up just a couple weeks ago was the 12th Annual Vespa World Days. This year was held in Belfast, Northern Ireland.

Thousands of riders and spectators attended the event from all over the world.

Here’s a link with some of the details and delightful photos.

And in other Vespa news, we are inching ever closer to a fully electric model.

The Vespa Elettrica is set to be released later this year, boasting 80-160 miles per charge, depending on which model you have. The Elettrica X has double the distance of the base model, says Piaggio designers. It is supposed to maintain brand design, but offer some of the bells and whistles you’d expect from such a hi-tech machine. This will be an interesting addition to the Vespa family.

Killing it in austin

I recently went on a trip to Austin, Texas. It was an amazing place, filled with great music and food, interesting history, and more scooters than I would have guessed. Check out some cool pictures from my trip! Austin, I’ll be back, don’t you worry. 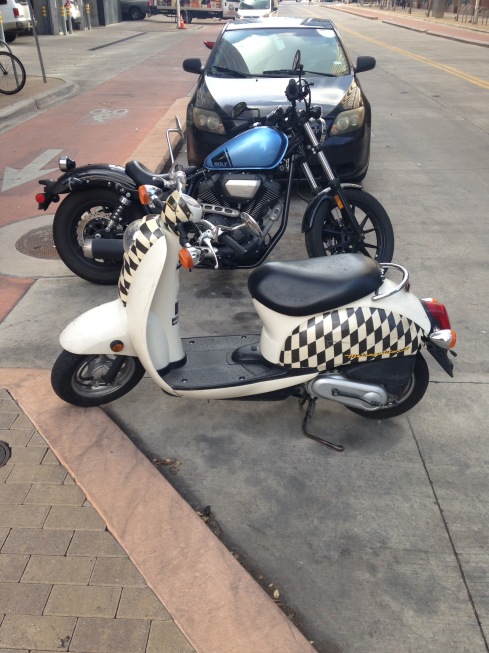 A little humor and updates

I thought to myself that I should share this little comic a friend of mine sent me. It’s so great, especially for those of us that live in the Southwest United States.

Stay tuned for my engine rebuild series. I’ve got all the parts I need and I will be attempting to rebuild my LML 5-port engine over the coming weeks. With a little one and a full time job, there’s little time to devote to a new project, but I’m really itching to get the V running again. It’s going to be premier weather in no time. 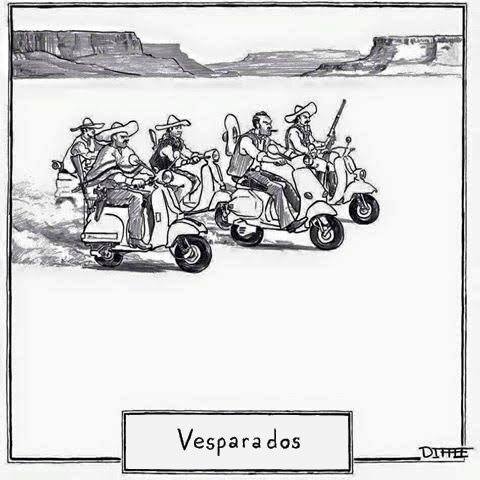 Summer is winding down

At least here in Arizona, kids are going back to school and people aren’t traveling as much because of that. The roads are more congested, which sucks for commuters. However, we have had record heat and widespread flooding throughout the Phoenix area. It’s been a crazy summer.

But I know that elsewhere in the country, you’re going to be heading into fall in just the next few weeks. Here, that’s like October. But the fall tends to be prime riding weather. I’m hoping to get my scooter up and running by October. I want to have that experience too! Plus, it’ll be a nice little commuter to and from work. The guys in the packaging plant where I work will tease me relentlessly, but I don’t mind.

Happy New Year to all the Slow Kids out there!!

We hope you had a wonderful holiday season and that 2015 was kind to you. I’ve got some really great things lined up in the coming months for all of you, so please stay tuned!

In the meantime, check out this little Vespa I caught in the parking lot at my office yesterday in the rain. 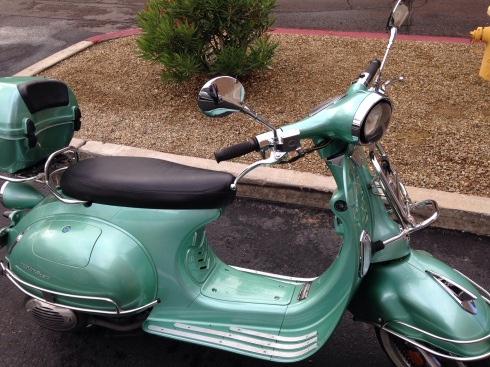 Have a great day, and if you’re still out riding this winter, show us your ride in the comments! We’d love to see what you’re rolling.

Scooter Pic of the Day

Up above you see a nifty little discovery: Another Kymco Agility 125!! This one was brand new with the temp plate still on the back of the bike.

It seems word is getting out that these bikes rock, although the new owner needs to learn to lock their steering column!

As for the lack of postings as of late, I do apologize.  I recently made the upgrade to Windows 8, and while I’m loving the faster layout and the improved performance (went from a 1 minute 18 second boot up time to 16 seconds cold!), it seems developers are keen on seeing this platform die by making the CRAPPIEST apps in the world!! C’mon WordPress!!!  Your web based publisher sucks horribly, and what passes for a Windows 8 desktop app is so limited, I can create more in depth posts on my PHONE!  You can’t even edit from the new Windows 8 app, only post.  And, the formatting options aren’t worth a damn either.

Very Disappoint, WordPress…. very.  Guess the most widely used OS in the world isn’t hipster enough for you guys to actually make a decent app, huh?

(The opinions herein do not express the overall opinion of the Slow Kids Scooter Gang and are an editorial by the author.  But, wordpress is sucking pretty hard right now, so there!)

Scooter Pic of the Day:

I know, I know… it’s been quite a few days since the last “of the day” pic.  I’m sorry!! I had this pesky thing called “work” and a bunch of plays needed lighting and sound built for ‘em.  But, to make up for it, here’s a pristine example of a “modded” Lambretta in the 60’s style.  About as much farkle as your brain can take before it implodes…

This is part of an installation at Federal Station in Melbourne, Australia. Haven’t found out much about it, but I’m digging for more.

Ok.  I promise I got that out of my system.  Carry on.  I’ll post something more-motorsport related later, like scooters taking on the Dakar rally or images of the Brighton Beach Riots or something.

(Doesn’t change the fact that I want one of those as a pet. Just sayin’)

Scooter Pic of the Day:

The best post wedding transport ever!  I wish I could of done this, but when me and the Mrs. Trotsky (would that make her Frida Kahlo? Nevermind… art/history nerd joke) got married, we were so broke that I didn’t even have a scooter.

It was a happy but sad time to be sure… Happy to marry, but sad there was no kickass Stella like this to ferry us home.

(It’s ok: We actually got Jack-In-The-Box on the way home since we didn’t even get to enjoy the wedding food we were so busy. Fast food is always tricky on a scooter)